The start of the school year is always filled with community building and “getting to know you” activities.  They are critical to establishing a rapport among students and teachers and are a great way to ease into the new year.  Along with the fun and games, many classrooms also want to start with routines and procedures- including those very important classroom rules! While it is very easy to make a list of rules and expectations or purchase a ready-made poster with classroom rules and hang it on the wall before the students arrive on the first day, consider the impact of allowing students to create those rules together.

To think about the way we wanted our second grade classroom to function, my students and I began by reading a lot of books.

The titles shown address our differences as people, the desire to create a welcome environment, and some silly stories about the beginning of the school year and the chaos that could ensue if everyone just did whatever they want.  These stories invited a lot of conversation about what it means to be a part of a classroom community and how to craft our beliefs so that we can be safe, happy, and successful throughout our day.  Instead of creating an endless list of rules that begin with “No ______” we thought about what we believe and how to demonstrate those beliefs.

This is what we ultimately decided:

This has become our class creed- and we review it every morning and refer to it if there is a defugalty during the day.  Because the students had a hand in creating the document, it is more meaningful to them and they are invested in making our community a nice place to live for the next 180 days.

From the Classroom – Celebrate Banned Books

Want to get your students fired up about books? Get them talking about banned books!

In honor of banned books week, I invited by students to take a closer look at some of the books that made it to this year’s list of the most challenged and banned books. This resulted in a vibrant and at times even heated discussion.

To start, I asked students to partner up and choose from a display of books that had either been challenged or banned in the last year. But before I released students to select their titles, we discussed the difference between these two terms together as a class. Once students realized the books on the back table were there because someone thought they were inappropriate for them to read, they were practically jumping out of their seats to make their selections. 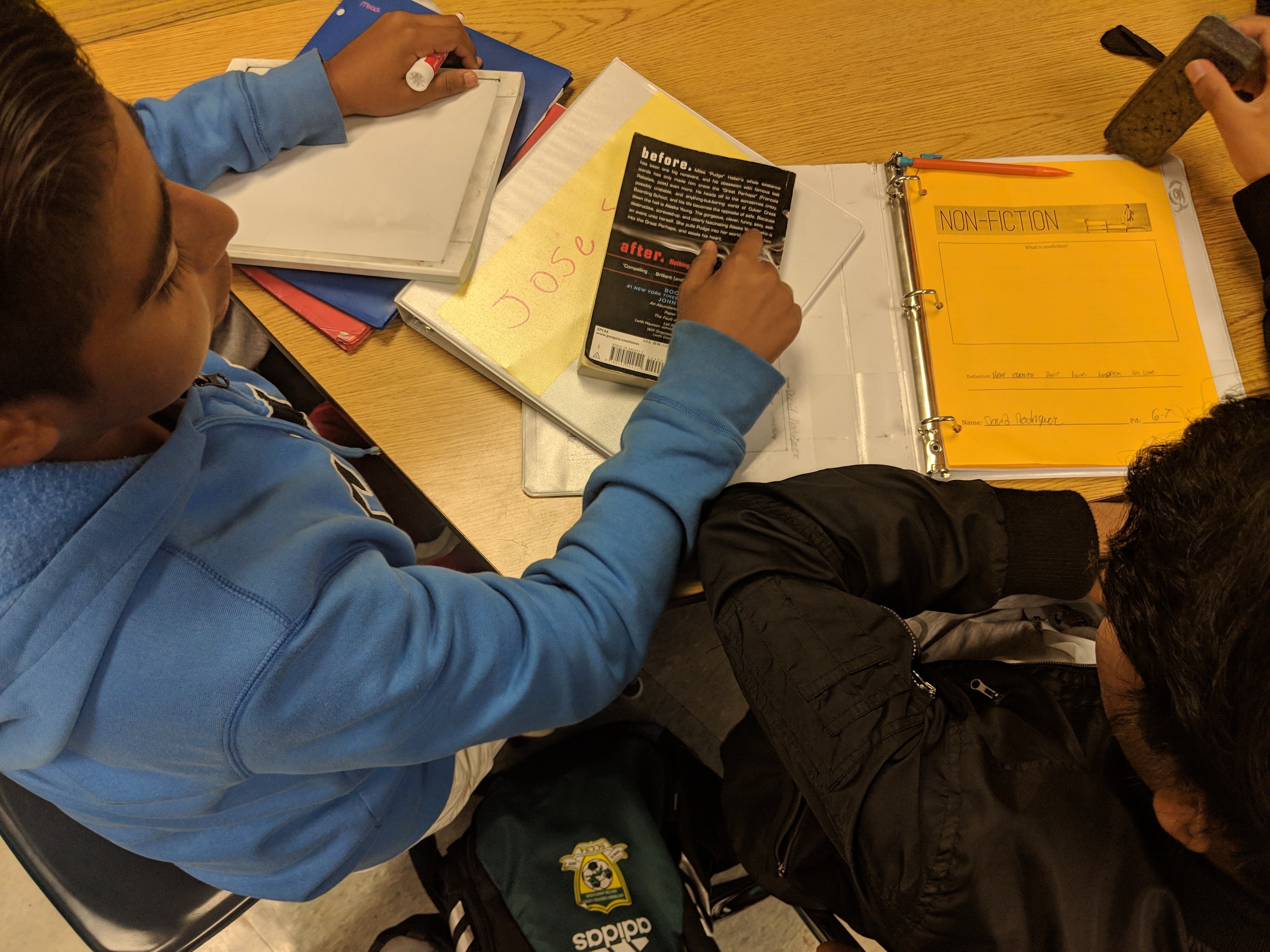 On dry erase boards, they worked together in pairs to quickly use their book selection strategies to investigate the book and make a list of guesses about why it might be challenged. Guesses were surprisingly accurate and included reasons like bad language, racism, inappropriate pictures, and gay characters.

In an effort to provide some background on the issue, we read a recent article about the topic titled “Banned Books: Librarians Push Back Against Censorship“. As we read, I asked students to annotate the text according to what surprised, confused, challenged, or confirmed their thinking. We then discussed some of their key takeaways from the article: 1. parents are the ones challenging books, not teens 2. most challenges are because adults think real life issues like LGBTQ topics and racism are inappropriate for teens to read about 3. some books get banned without anyone even knowing about it. As we noted these takeaways the noise level in the room continued to increase because students couldn’t help but comment on how unfair or ridiculous they thought it was. One student even asked if we could hold a class-wide debate on the issue. 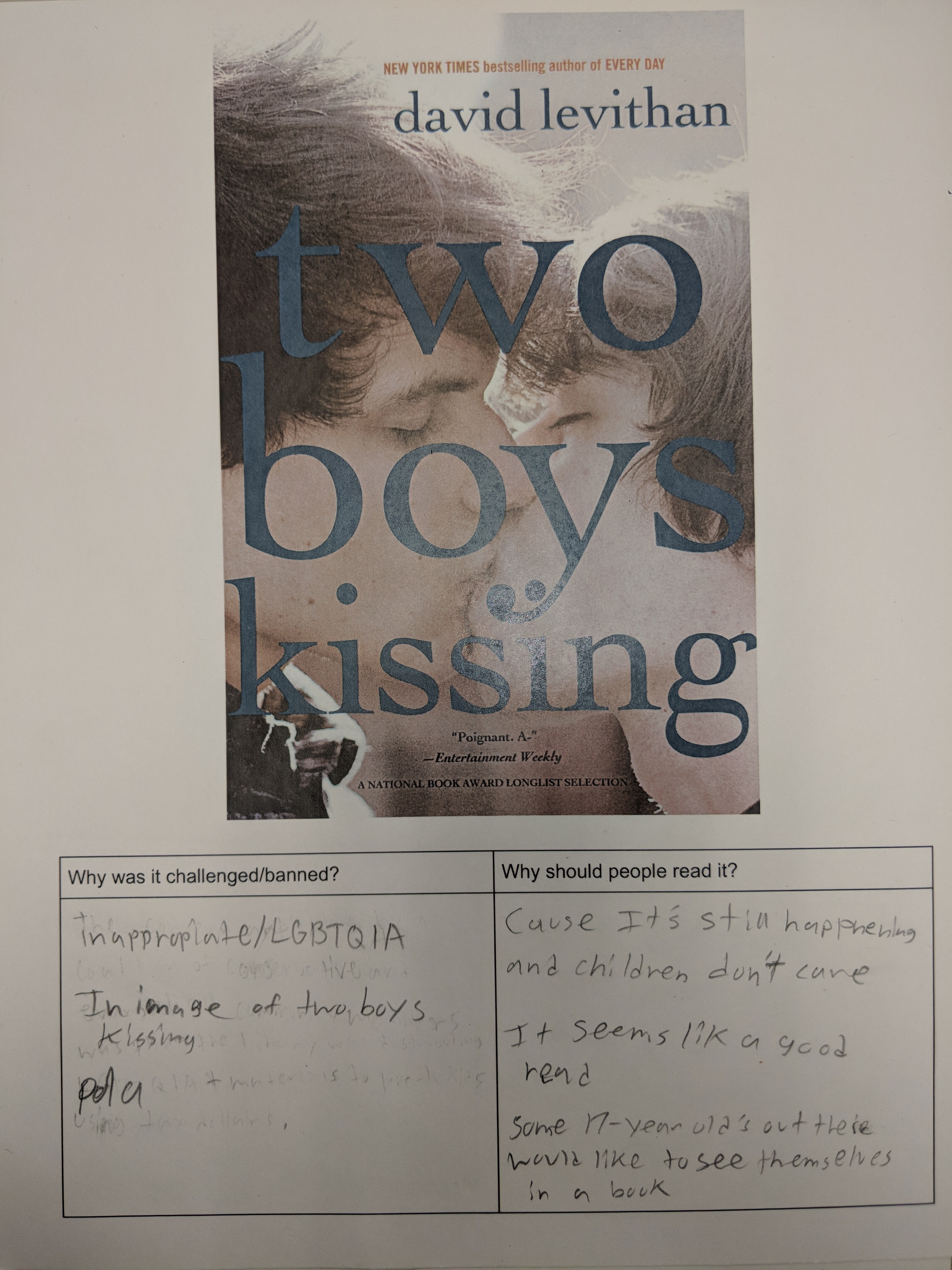 Finally, I capitalized on the incensed enthusiasm and asked students to join their librarians in pushing back against censorship. Students returned to the books they selected at the start of class and used a Marshall University website to research the actual reasons those books were challenged by adults as inappropriate for students to read. Then they came up with their own list of reasons why teenagers should read those books anyway. This week, their assignment is to put those reasons to read the banned book out there in the world in some way – create a social media post, a poster, a letter, etc. I am excited to see what they come up with.

How do you celebrate banned books week with your students?