Frank Murphy’s latest Step Into Reading biography is a cradle to grave story about Clara Barton. Frank, a sixth grade teacher in Council Rock School District in Bucks , Pennsylvania, loves the research behind a good story. Frank tells us of Clara’s shyness on the very first page, in part, because she spoke with a lisp.  He shows us how all her family members taught her something different and important. 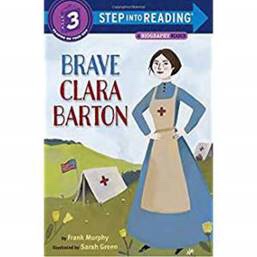 Clara became a teacher of a one-room schoolhouse in New Jersey.  The school grew to be big, and Clara wanted to become principal, but the position was given to a man instead. When the Civil War began, Clara helped injured soldiers on the battlefield, even though many men felt women had no place there.

Frank shows the power of writing in this book. Clara wrote letters to friends in the North to ask for more supplies when they were running dangerously low.  After the war, Clara conducted a letter campaign to help families find relatives who were missing. It is amazing that she received over 63,00 letters asking for her help, and more amazing that she answered each and every one!

I learned so much about a courageous woman who overcame her shyness to serve humanity until she was almost ninety. It was Clara who helped to organize the American Red Cross after returning from Europe where she worked with the International Red Cross. Our students need to hear about people who work to make a difference in this world.

Today, we’re celebrating women around the world who have worked for change.  Read a book or poem or news article today to raise awareness for International Women’s Day,  celebrated on March 8, 2018. Thank you, Clara Barton, for your raw courage and your ability to imagine the possibilities to live a full life, breathing more courage into the world and tackling big problems!  Thank you, Frank, for giving us another biography about a woman who reminds us what human beings are capable of when they take some risks and pluck up their courage!

Follow the link to watch a video clip where I give an on-the-spot book review at Saturday’s PAWLPday Conference.

From: PAWLP
← Writing in the Dark
Tools of the Trade: March Madness →
No comments yet