Tools of the Trade: Introducing Nonfiction Notice and Note Signposts

In their Reading Nonfiction: Notice & Note Stances, Signposts, and Strategies, Kylene Beers and Bob Probst write: “Fiction invites us into the writer’s imagined world; nonfiction intrudes into ours and purports to tell us something about it.” Now, perhaps more than ever, it is important that we teach our students how to navigate this intrusion and how to challenge the “truths” of nonfiction writing. In this book, Kylene and Bob share a scaffolded approach to teaching students how to do just this. Their strategies can easily be adapted to any grade level from high elementary to secondary.

My 9th through 11th grade students have found great success with the strategies this year. I started by encouraging them to ask themselves the three big questions: What surprised me? What did the author think I already knew? What challenged, changed, or confirmed what I knew? By asking these questions, students started thinking more in depth about the nonfiction articles we read together and our conversations went beyond just comprehension and regurgitation of facts.

After we practiced the big questions, we moved on to the signposts: Contrasts and Contradictions, Extreme or Absolute Language, Numbers and Stats, Quoted Words, Word Gaps. I used short video clips to introduce the general concepts of each of the signposts.

Contrasts and Contradictions: We watched a short YouTube video that depicted a school room in Africa. As we watched the video, students noted the differences: 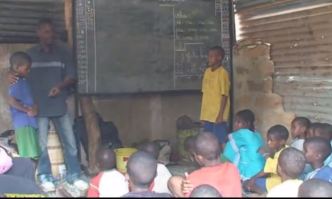 students sitting on a crowded dirt floor, few materials, one-room straw hut, mostly or all boys, everyone quiet and paying attention. When we moved on to discussing “why does this matter?”, the conversation took off. Students realized how valuable an education is to the students in Senegal, they realized girls may not have as much access as the boys, they made comments about how American students seem to take their own education for granted. And they asked questions: do they have to pay for school? do girls go to a different school or do they not get to go to school at all?  Some students even asked if they could take out their phones to google the answers.

Extreme or Absolute Language: We watched an excerpt from one of the presidential debates in which Donald Trump and Hilary Clinton debated immigration. Students noticed words and phrases like all of the people, thousands of mothers and fathers, worst, single biggest, all of the problems going on in the world, etc. When we discussed why it was said that way, students realized the issue was probably being exaggerated by the candidate and started to question why.

Numbers and Stats: We watched TheTime You Have (In JellyBeans) and students jotted down any of the numbers that stood out to them throughout the video. After we shared our notes with each other, we asked ourselves why the creators of the video used those numbers. Students were very interested in the amount of time we spend doing things like eating, going to the bathroom, sleeping and eventually realized that once you take all those beans out, there aren’t very many left to do the things that matter.

Quoted Words: We watched a news report on the clown scare issue and students noted the different people that the news reporter spoke with: girls from the school, a mom, and a police officer. When asked why the reporter talked to these people, students realized that the girls were able to talk about their actual experience with receiving the clown threats while the police officer worked more as a voice of reason, explaining that the threats were mere hype but also reviewing the penalties.

Word Gaps: We watched a couple minutes of a tennis match with commentary and students jotted down unknown words used by the sports announcer. Their lists contained terms like ace, love, volley, set point, etc.  We then watched a second time and students paid attention to what was happening when the words were used. After the “reread” students discussed the words and tried to use context clues from the game to figure them out. This discussion led students to realize the importance of stopping and using the context for help when encountering new or unfamiliar words.

After each video discussion, we practiced applying the signposts one at a time to nonfiction articles we read together as a class. Eventually, students noticed and noted the signposts in self-selected articles during a research project. They were able to use their noticings to generate research questions, sift through information, and create short research presentations, all on their own.

Kelly Virgin is in her twelfth year teaching English for the Kennett Consolidated School District and has been a PAWLP fellow since 2010.  She is a proud bookworm and loves sharing her passion for reading and writing with her students. This spring she will facilitate the Strategies for Teaching Literature course on Tuesday evenings.