Books on the Blog: Maybe a Fox

Another installment of Books on the Blog with middle school librarian and media specialist Gabija Fischer! 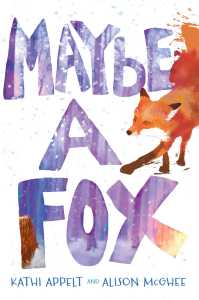 Maybe a Fox by Kathi Appelt

Kathi Appelt tells of sisters and best friends, Jules and Sylvie, in her Maybe a Fox. Sylvie spends her days reminiscing about their mother who died long before Jules would even be able to remember her. Not only does Jules long to know their mother like Sylvie does, but she also longs to understand Sylvie’s own cryptic burning wish: to run faster. To Jules, Sylvie seems to run fast everywhere, even to places she is not supposed to like the Slip. Their father recites to them often, “Do not, under any circumstances, go near the Slip.”

Unfortunately, Jules learns why the rule is so important when Sylvie disobeys this rule and disappears. But just before the disappearance, Sylvie and her sister built a snow family of a mother, a father, two sisters, and a tiny snow fox. Maybe the fox would be the key to understanding all Jules longs to understand about her sister, about her mother, about the Slip.

I heard a soft whimper from the pages every time I opened Kathi Appelt’s Maybe a Fox, but the words just wrapped me up and held me close as my heart ached for Jules and the pain she feels after losing her sister. But also my heart ached for Sylvie, who mourns for her mother and places the burden of always protecting her sister on herself. This is a beautiful, gentle story of sisterhood, of grief, and of finding comfort in the world. But despite the small the glimmers of hope that this novel promises, don’t be surprised to empty a box of tissues while reading Appelt’s lament.

Tags: #mitm, #pctelanews, book reviews, Gabija Fischer
From: Book Reviews, Books on the Blog
← Reflections from an Author: Why Teachers Must Write (Guest Post)
Teacher-to-Teacher: Poetry as Noticing →
No comments yet