Books on the Blog: The War that Saved My Life

Today, middle school teacher Ginny Jervais, a 2015 PAWLP Fellow, brings us a review of the novel, The War That Saved My Life by Kimberly Brubaker Bradley. 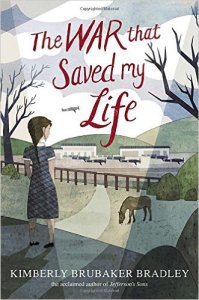 Imprisoned by the four walls of the London flat her family shares just before World War II arrives in England, Ada Smith has barely experienced the outside world. Her uneducated and abusive mother refuses to release her from their apartment in order to conceal Ada’s club feet, a sign of the devil according to her mother. In this way Ada lives the first ten years of her life, fearful of her mother’s beatings and lonely for companionship.

When Ada’s brother and other neighborhood children are evacuated into the country before the first bombs hit London, Ada sneaks away with them, and she and her brother are placed with a lonely, grieving woman. In this new life in the country, Ada slowly enters a world where she experiences the joys of open fields, pony rides, caring friends, and loving parent figures. Amidst these new adventures, however, Ada is aware that one day she may return to her old life.

Written for the upper elementary student, The War That Saved My Life wraps its readers in an array of emotions as Ada grows from insecure cripple into confident hero. A previous life where she was shut off from the world leaves Ada confused and not always fully understanding her new range of feelings.  Though the main character may not be able to express her feelings of joy, sorrow, and hate, Kimberly Brubaker Bradley draws her readers into Ada’s situation quite deftly, and we empathize with her. Early in the book readers nervously wait as Ada attempts to avoid some of her beatings. Later, we smile over ten year old Ada’s innocent misinterpretations of the world due to her lack of schooling.

Bradley has readers rooting for Ada as she meets goals she sets for herself such as learning how to maneuver her club feet in order to mount a pony. Perhaps even more than Ada, readers realize that this wonderful new world of Ada’s may be brief. A return to London will most likely heighten the war between Ada and her mother. The journey through all of the protagonist’s highs and lows make The War That Saved My Life, a 2016 Newbery Honor winner, an irresistible read.

Ginny Magill Jervis teaches fifth, sixth and seventh grade English/Language Arts at the Country Day School of the Sacred Heart in Bryn Mawr, where she has enjoyed sharing her passions of reading and writing for sixteen years. She is a graduate of PAWLP’s 2015 Summer Institute.