Books on the Blog: Ready, Player One, and Buck

Ready Player One by Ernest Cline

I became aware of Cline’s first novel a few years ago when a close friend and fellow English teacher raved about it.  His rare enthusiasm made Ready Player One a title I kept stashed away in my memory, but also contributed to my falling into the dangerous trap of judging a book by its fanbase.

When this particular friend went on and on about this bildungsroman, dystopian, virtual-reality video-gamer adventure tale, I dismissed it.  He is a gamer, and I am not.  He loves Star Wars, obscure comics, and prog rock.  I can appreciate these, but nowhere near the extent he or many of their avid enthusiasts do.  This book sounded like something right up his alley, and something several blocks away from mine.

Last year, my curriculum supervisor sent out a message that she read the book and loved it, asking if any teacher would want to use it in class.  Always open to trying new books with my students, I reconsidered the text.  Immediate arguments against it mounted: It’s not literary enough.  It’s cliché ridden and predictable.  The students won’t get the mountains of references to 1980s pop culture.  What classic book will I have to give up to fit it in?

Fortunately for me and my students, I set my cynicism and biases aside, making it an additional read in a couple classes and an optional read in another.  The response was overwhelmingly positive, many claiming it as their favorite book they’ve read in school.  Thematically, the novel enhanced my teaching of “The Hero’s Journey” and enriched our conversations and writing about identity, especially in relation to the growing influence of our on-line selves.  My worries that girls, non-gamers, and those uninterested in 1980s would be bored were proved wrong, and several bragged of researching the book’s references on their own.  Of course, there were haters.  One commented that the book was “written for sixth graders” and a couple others argued that “the author tries to be inclusive, but in the end only reinforces a white male bias.”  Still, these views contributed to more compelling class discussion.

The novel’s summary can be found all over the internet, so you can investigate the growing number of sites about the book if you’re interested.  But as far as a teacher’s experience with a book, I couldn’t be much happier with Ready Player One. 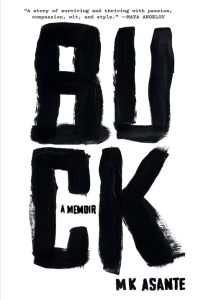 Let me say right from the start that I have never taught or used this book in the classroom.  A fellow educator recommended it to me recently, so I read it.  And I read it quickly.  Not because I had to, but because once I started, I wanted to.  And once finished, I ordered a few copies for my classroom.  It’s the kind of book I want to have on hand to pass on to students less motivated by our usual curriculum.

Buck is a memoir set in Philadelphia.  That alone made me enjoy Asante’s tale of growing up around different parts of the city where I was born.  But his Philadelphia and mine are very different.  Still, Asante didn’t exclude me with this book.  Rather, his talent for clear, direct description and honest expression of emotion drew me into his world, keeping me there beyond the final page.  The usual labels of “raw” and “gritty” may fit this realistic depiction of his coming of age, but his language goes beyond these terms to make it something very human and universal, regardless of the inner-city setting.

Explicit language and sexually mature scenes in the book make it one you need to be careful with in the classroom.  Still, I have no doubt this is the kind of book that can make a reader out of a non-reader if given to the right person at the right time with the right intention.  And the book’s final message promotes education and the power of language better than any book I’ve read in a while.

Bob Zakrzewski is a 2009 PAWLP Fellow.  Teacher since 1999, he currently teaches English at Strath Haven High School and Cabrini College.