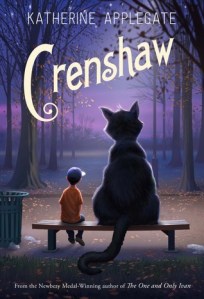 Crenshaw, Jackson’s imaginary cat, states, “Imaginary friends are like books. We’re created, we’re enjoyed, we’re dog-eared and creased, and then we’re tucked away until we’re needed again.” And for Jackson who feared homelessness…again, the time of need came all too often, and in times of need, Crenshaw would appear. While his parents cannot seem to catch a break, both of them out of jobs and his father battling multiple sclerosis, Jackson and his little sister spend much of their time worrying about losing the last of their possessions. For once those possessions are sold, what would be left for Jackson but a giant, talking, imaginary cat and a crowded van in which his family would spend their days? Could Jackson ignore the truth of his situation or would admitting the truth finally set him free?

I was more than excited to get my hands on this book, given how much I adore Applegate’s The One and Only Ivan (Do yourself a favor and read Ivan if you haven’t yet). While I found the idea of the imaginary cat just slightly far-fetched and distracting, I could appreciate the importance of Jackson’s method of coping with the prospect of homelessness. I am thankful that my childhood was not threatened with a similar fear, and I hope that I can always provide a safe and secure home for my children. But I am realistic. I know that not everyone is blessed with such comforts. Crenshaw has a soft, simple way of presenting the heavy topic of homelessness in an understandable and touching way, especially to those who might not otherwise relate. This is a book that can be tucked away and reread in a time of need, just like Crenshaw himself tells Jackson.

Aside from literature, I have another love: science, but especially human anatomy. It is no wonder I scooped up this graphic novel the second I saw it. While I knew that the premise of this book, to introduce the reader to the human anatomy, what I did not expect was to laugh, actually laugh out loud, throughout reading it. It is educational. It is adorably funny (each system is presented to the reader by a “BONE-afied” skeleton). Just read this…and then give it to anyone who loves science, to anyone who thinks science can’t be fun, to anyone who likes a good pun.

The Nest by Kenneth Oppel

Kenneth Oppel did it again. Like he did with his Boundless, Oppel kept me up at night. He reached right off the pages of The Nest, pulled me in close, and whispered in the darkest, creepiest whisper, “Worry and keep worrying.” And worry I did. I worried about Steve who battles severe anxiety and OCD. I worried about Steve’s baby brother who faces life threatening health conditions. And I worried most about Steve’s decision to contract with an angel-wasp. But I could never blame Steve for sealing the deal with the wasp. How could he ever turn down the chance for peace and a “fixed” baby brother? Or could he?

Once I start watching a scary movie, I have to finish it no matter how scared I am just to find out what happens (confession: I need to know that the”bad guys” are gone. I need to know that I am safe from them). The same is true for this book; I could not put it down. I needed to know what was to become of Steve, what was to become of his baby brother, what was to become of the wasps. While I know that I am safe (at least until I see my first wasp this spring and that same fear courses through me again…thanks, Oppel, for instilling in me an eternal fear of wasps), I still find myself thinking much about the idea of perfection. What does it mean to be perfect? Does it mean to be without limitations, physical or mental? Does it mean being just like others? And after reading The Nest, I am again reminded that all we need to do is love ourselves and love each other exactly the way we are.

Tags: Gabija Fischer
From: Book Reviews, Books on the Blog, Literacy
← From the Classroom: Does Anyone Have Any Questions?
Teacher to Teacher: A Journey with a Mentor Text    →
2 Comments Post a comment