Guest Post: Finding and Honoring Our Many Stories (Part 1) 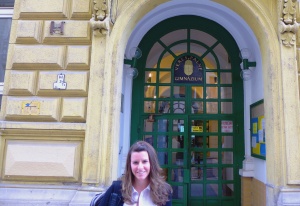 I spent last year teaching in Budapest, Hungary through the Fulbright Classroom Teacher Exchange program. This means I traded places with a Hungarian teacher; she came to teach at my U.S. school, Great Valley High School, and I taught in her place at Veres Pálné Gimnázium.  As you might imagine, there were myriad ups and downs in that experience, but I would do it again in a heartbeat.  It made me into a better student, teacher, and person.  Most important, it sharpened the need to look for the many stories – personal, cultural, societal – that can be honored and celebrated, and how imperative it is that we teach our students to do so.

Before I even got to teaching, I hit a few stumbling blocks of differences.  For example, the computer was in Hungarian.  Yes, now that seems so obvious, but in all that planning and preparation, it never occurred to me that I’d need to learn tech terms in Hungarian. It made for a very interesting first day trying to print lesson plans!  There was also that one time no one told me it was a National Holiday and everyone would be wearing black and white to school; I came in wearing an orange cardigan to match my orange ballet flats.  (I never quite lived that one down!)  Then, there was the actual teaching.  The biggest difference: in the U.S., I teach literature and writing; in Hungary, I was teaching English as a Foreign Language.  It was 100% being a first-year teacher all over again, and all the emotions that came with it.

Yet still a greater challenge was also one of my greatest responsibilities: how I both represented and responded to cultural differences. As the “American,” I was immediately the expert on all things American, even though as any of us knows, we are too huge a nation for there to be such a thing.  I spent a lot of time explaining that being “American” does not mean any one thing. (And that no, the TV show Friends isn’t real, nor is any other sitcom where people who are seemingly jobless live in an awesome NYC loft apartment!)  When asked questions, my refrain was along the lines of “Yes, I’m sure that happens somewhere in the US, but…”. I often found myself saying “I don’t know,” because I’d never been to certain places, and I didn’t want to misrepresent or perpetuate what might be just a stereotype.

Through their questions, it was quickly apparent that the U.S. to them is only what media presents it to be: a homogenized living-the-American-dream society. 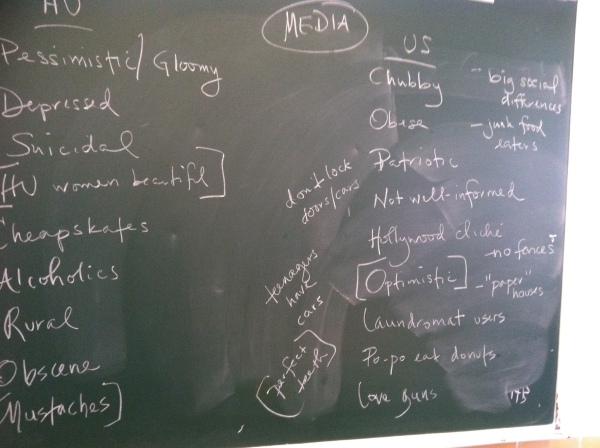 At first, I was frustrated.  But I took a step back and thought about how I had witnessed my American students having such a narrow purview of other nations as well.  Moreover, in speaking with my exchange partner, she said she too felt that many she’d met were all-too-willing to lump her and Hungary into their pre-established stereotype of whatever they knew, or whatever the media had fed them about Eastern Europe, or post-communist countries, or World War II.

And there we found the true culprit:  both sets of students had formed perceptions from media-driven stereotypes, stories that are all the same, stories that have flattened a nation, a people, and culture into its lowest common denominator, ignoring the individual authenticity that any nation or person truly possesses.

So how do we honor and celebrate differences we don’t even know exist?

First, we have to discover the differences.

While in Hungary, this meant having all of my Hungarian students do things like read a New York Times photoblog and discuss their reactions.  They.were.amazed. Some had no idea America had such wide open spaces. Others reflected on how the images looked just like experiences they had had in Hungary.  I felt successful, but I knew that it wasn’t enough to completely alter their approach to other stereotypes as well. We also had to recognize fully why and how stereotypes are perpetuated, and what we can do to avoid them in the long run.  It was then I came across a Ted Talk by author Chimamanda Adichie.  Here, she pointedly and eloquently delineates how as a Nigerian, she has been negatively affected by the stereotypes of Africa, almost none of which apply to her or her individual experience.  She calls on listeners to see the many layers a nation or citizen of that nation can possess, because

“… to insist on only these negative stories is to flatten my experience and to overlook the many other stories that formed me. The single story creates stereotypes, and the problem with stereotypes is not that they are untrue, but that they are incomplete. They make one story become the only story.”

I showed this to my students and we together examined media bias and how it affects our view of the world. I asked what would happen if I only knew Hungary through its media presence.  (They were visibly concerned!)  We thought about the many stories we know of our countries and shared them.  To apply it to the U.S. and explain why I could never be an expert, I asked them to think of Hungary’s differences and asked if they could explain or represent them all – to which they of course said no! – and then I asked them to multiply all of Hungary’s diversity by 50 to understand the many stories of the US.

When my students were able to get to this mental acceptance – when they began qualifying their responses with things like, “Well, in Pennsylvania, did you experience this?” that meant I’d had some success.  When we had even fledgling conversations about cultural differences and acceptance within Hungary – for example with the Roma population – that was success.  When my students emailed after I’d returned saying they’d corrected someone who made a sweeping generalization about either America or Hungary, that was success.

When I speak about Hungary now that I’m home, I am careful about qualifying or limiting my descriptions, for example when asked if Budapest is clean and safe, I reply with “In District 5, the streets are really clean and safe, but the further outward you move from the tourist/business centers – as in most cities – the more street debris and crime you’ll encounter.”  Yes, it’s very specific but it’s important to avoid creating generalized impressions.  I was doing the same each time I responded to questions about America, hoping to always honor the beautiful and diverse nation that we have, and now I need to do that for the beautiful and diverse nation I’ve left behind.

But this is still only part of my story.  I hope you’ll come back next week to read how all this has affected my approach to teaching here in the U.S. as I continue to apply my learning to my American classroom…

P.S. If you’d like to read more stories from my Hungarian experience, please visit my blog from the year abroad!

Brittany Carlino is an English teacher at Great Valley High School.  Though she typically works with 9th and 11th grade, she also teaches Debate and Films as Literature.  As one who is passionate about culture, travel, and learning, she led the International Classroom Exchange Program for 5 years, and as you have read, taught in Budapest, Hungary for the 2013-2014 school year.  In general, Brittany loves reading and writing and engaging in all things learning. (Indeed, she has a “Nerd” tshirt and wears it proudly!)  In addition to being Ms. Carlino, she’s a singer, a Penn Stater, the luckiest of wives, and a very proud aunt.