Resolve to Read this Book: A Review of Minds Made for Stories 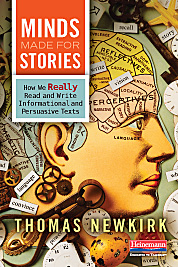 It’s not often that I read aloud to my husband from “teacher” books, but I found myself doing so from Tom Newkirk’s latest work as often as I was from Steven Johnson’s How We Got To Now on our recent road trip to Cleveland. The former, Minds Made For Stories: How We Really Read and Write Informational and Persuasive Texts, knocked me out with its treasure trove of facts (not all related to writing) just as much as the latter did.

But it wasn’t just the excerpts that Newkirk included from disparate pieces on everything from cancer research to corn sex – look it up; it’s not what you think – that impressed me. Instead it was how Newkirk used them to build his argument that narrative shouldn’t be divorced from the other modes of discourse.

With chapters like “Itch and Scratch: How Form Really Works” and “Numbers That Tell a Story”, Newkirk’s work is not intended just for English teachers. He wants all of us to stop assigning the five paragraph essay with its preformulated thesis statement and return to Montaigne’s original conception of an essay as a means of trying out a thought or as Newkirk puts it “scratching an itch.”

Newkirk acknowledges the work of three writers who’ve influenced his thinking. The first two will come as no surprise to readers of his previous texts: Peter Elbow and Donald Murray. The third is Daniel Kahneman, whose book Thinking Fast and Slow, is central to Newkirk’s argument. It’s been on my to read pile for a while. I’m now moving it to the top of the stack.

Not convinced yet to pony up for Minds Made For Stories yet? Newkirk spends a chapter listing the seven deadly sins of textbook writing as well as what we should look for in great nonfiction: humor, surprise, use of speech, grounding the complex in the familiar, strategic self-disclosure, and finally, affection for the material. Newkirk scores on every point throughout this text.

As we begin this new year, let’s resolve to read more to improve our craft. Adding Mind Made For Stories to your TBR pile will certainly help you meet this goal. 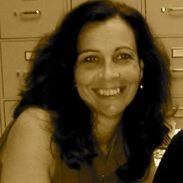 Judy Jester is an 8th grade English teacher in Landenberg, PA and a co-director of the PA Writing and Literature Project. She blogs regularly at thirdandrosedale.blogspot.com and can be found on Twitter @judyjester.

Tags: Judy Jester, mind made for stories, newkirk
From: Book Reviews, Key Strategies
← YA Book Love
Book Review: The Island of Dr. Libris →
No comments yet